For over 20 years Flubenvet™ 5% Premix has been added to poultry feed to provide broad-spectrum worm control for layers and gamebirds.


Flubenvet remains the only dewormer licensed for the control of ALL the life stages of ALL the main species of parasitic worms1. This is critical for effective control because worm eggs far outnumber adults and can survive in the environment for months or, in some instances, over a year. Worm eggs are also able to resist destruction by many commonly used farm disinfectants. This means viable eggs can still be present in cleaned poultry houses and on ranges between flocks. Therefore, when talking about worm infestations, it is always better to control the problem before it is visible. Especially as worm damage within the birds can occur prior to any clinical symptoms being observed, which will reduce bird performance. Young pullets are very susceptible to worm infections and it is very important to worm before transfer to production. Roundworm (Ascaridia galli) and especially hairworm (Capillaria spp) infections will cause depressed growth and undermine the general health status of the flocks.


All poultry reared on litter or in free-range systems are at risk from parasitic worm infections. Roundworms are the most common species of worms that infect laying hens and can cause a significant drop in egg production through enteric disorders. An extra concern of roundworm infection is that occasional roundworms may undergo an aberrant migration and become incorporated into an egg. Hairworm infection can produce severe clinical signs. Affected birds appear pale and depressed, they become emaciated, develop diarrhoea and may die. Hens with capillariasis may develop a secondary vitamin A deficiency which, on top of the decreased laying rates, will cause reduced hatchability in breeders and pale yolks in layers. Gapeworms (Syngamus trachea) are also a concern for laying flocks. The gapeworm lifecycle can involve using earthworms as an intermediate host. In the earthworm, infections can persist for many years and over a period of time soil can become heavily infected. Moreover, wild birds will provide reservoirs of infection for domestic birds. 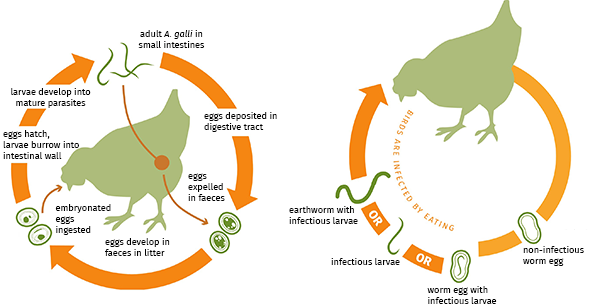 Once a flock is infected, the entire environment will be heavily contaminated with worm eggs. A good preventative deworming programme should be a standard management procedure on any poultry facility where birds are in contact with litter. Flubenvet’s active ingredient, flubendazole, simultaneously enters the worm through the mouth and skin or cuticle. It acts by binding to tubulin, the dimeric sub-unit protein of the microtubules. Flubendazole inhibits microtubular assembly in absorptive cells and causes an irreversible lytic degeneration of the cell, killing the parasite. Larval growth in developing worm eggs is also inhibited. Immature, fast-developing worms are particularly sensitive to flubendazole’s mode of action. Uniquely, Flubenvet is active against worm larvae and eggs. This means that immature worms are killed straight away, as well as any worm eggs that may be picked up preventing early damage, rather than being allowed to progress to adulthood, causing further damage as they progress through the mature stages.

Elanco understand that it is important to maximise your birds’ potential whilst balancing financial returns. Rising feed prices are hitting the pockets of producers everywhere, but here’s some good news. To help sustain your business we’re offering Flubenvet, the industry’s leading dewormer2, at a more cost effective price. This means that when it comes to cost savings you won’t have to compromise the health, welfare and productivity of your flock.


Contact your feed mill today to find out how your business can profit from this cost effective offering.

Flubenvet 5% w/w Premix for Medicated Feeding Stuff contains 50 mg/g flubendazole. Legal Category: POM-VPS. Birds must not be slaughtered for human consumption during treatment. Chickens, turkeys, geese, partridges and pheasants. Withdrawal period: Meat: 7 days Chickens eggs: zero days. To be supplied only on prescription. Advice on the use of Flubenvet or alternative medicines must be sought from the medicine prescriber. Other product names are trademarks of their respective owners. For further information call Elanco Animal Health on +44(0)1256 353131, or email elancouk@elanco.com, or write to: Elanco UK AH limited, Form 2, Bartley Way, Bartley Wood Business Park, Hook RG27 9XA. Use medicines responsibly www.noah.co.uk/responsible.

Please select the box to confirm that you are a poultry professional working in the layer industry in the UK.